Hundreds of people gathered recently at Umupuia Marae in the New Zealand town of Maraetai to celebrate the launch of Kaupapa – a word-description board game for learners and speakers of te reo Māori.

It is the latest addition to an ever-increasing range of taonga tākaro, or Māori games. Whether you play in Māori or English, it involves each player taking turns to describe actions, objects, places, natural phenomena, or names, while their teammates try to correctly guess the words.

Kuruho Wereta created the game with his friend Rosie Remmerswaal. The pair are drawing on a long tradition of using play to help revitalise te reo Māori.

In recent years, Māori games have undergone a revival.

The best-known game is kī-o-rahi, which is played by two teams using a woven flax ball on a round field. The teams compete to hit and defend targets. But research has identified over 300 traditional Māori games, many of which are now being revived. They range from strategy games to activities designed to improve agility. 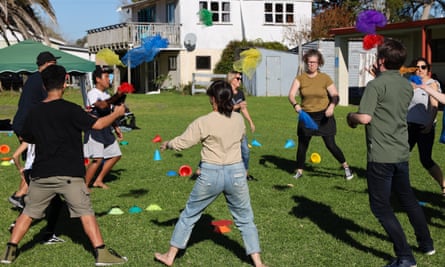 In Māori culture there is a strong connection between play and Māori deities – there is even a god, Rēhia, who personifies enjoyment and leisure. Wereta believes that games help people learn about these deities because when you play you embody the gods associated with your environment.

Darren Yates went to the launch with his partner Arnya and their young son, Te Ārahi. They loved being on the marae, he said, connecting with other whānau, and they especially enjoyed playing kī-o-rahi.

“To me these kēmu [games] are the equivalent to an encyclopedia of cultural knowledge, but instead of sitting on a shelf, they’re living in the communities that play them,” Yates said. “They help us stay connected to our ancestors and also allow us to continue to pass on mātauranga [knowledge] that enables us to live in sync with each other and our environment.”

Te Ahukaramū Charles Royal has been researching “te whare tapere” (also known as “te whare rēhia”), for over two decades. He says that, historically, every Māori community had these “houses” of entertainment.

Recreational activities were performed everywhere – sometimes outside, sometimes inside existing buildings – and there were no restrictions on who could be involved. “The whare tapere was a place where everyone of the community could attend.” It provided opportunities for people to get together and enjoy themselves.

The importance of joy

Te Ahukaramū believes Māori communities should embrace the tradition of te whare tapere. “We can be very, very serious in Māori communities. When people become involved in iwi, hapū, and whānau life, it is often because very serious things are going on – treaty claims, or some high court action, or some developer is wanting to mine a wāhi tapu [sacred place] at the back of a marae, or something.”

That work is important; but he is concerned that when young people, especially, go to their marae, they can become overwhelmed by the serious things going on in the community. “I feel it important that iwi, hapū, whānau communities, marae communities, create deliberately joyful, and consciously joyful experiences for their members,” he says. That way, the marae – for example – will become a more enjoyable place.

Wiremu Sarich is a leading exponent of taonga tākaro. He works with rangatahi to explore the “kura huna” – the hidden learnings and deeper meanings – these activities contain. He prefers the term “taonga tākaro” to “games”. 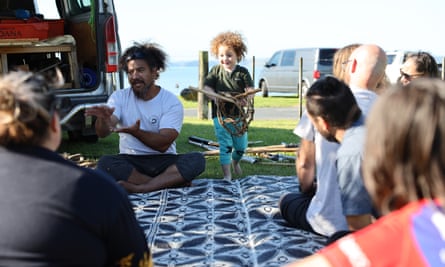 “The problem with ‘games’ is kids think ‘it’s just a game’, you play it and then it’s gone, or you engage with it for a moment and then you leave. It’s not really the best way to get anything valuable out of our taonga,” he says.

Sarich operates a whare karioi – what he describes as “a whare rēhia on wheels” – which allows him to share taonga tākaro with children across the country. The enduring popularity of kī-o-rahi, which is now in its eleventh year of secondary school nationals, allows him to introduce them to other games.

Historically, taonga tākaro were used to educate, Sarich explains. “They would use the games to develop different skills and different knowledge systems; so, they had other ways of disseminating information across the tribe.”

When people are happy, they are better able to learn – which opens up space to explore values such as manaakitanga (caring for one another) and tiakitanga (sustainability), as well as whakapapa (relational connections) to each other and the natural world.

Te Ahukaramū hopes whare tapere and tākaro will regain their prominent place in Aotearoa. He wants to see them thriving in Māori communities, and creating opportunities for non-Māori to develop a relationship with Māori culture. “That is about building a sense of intercultural knowledge and understanding in mainstream New Zealand life.”

Read the whole article by Philip McKibbin on The Guardian website here.